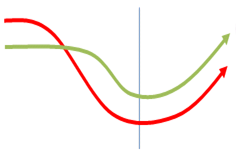 The calcium-dip is not the only low in the transition period. Energy is scarce as well around calving. But why exactly is that a problem?

Until about one month before calving, energy intake is generally above requirements and body reserves are established. Two weeks before calving, the energy demands for the calf and the start of the milk production increase.
Around calving and during the first weeks of lactation, feed intake is not sufficient to fully compensate for the energy requirements. This results in the Negative Energy Balance (NEB: the energy output is greater than intake) and cows address their body reserves to supply the energy for milk production.

How does that work?
The udder needs high amounts of glucose (sugar) and is given priority over other body parts. Muscles need to switch to fat as an energy source. The breakdown of fat, results in free fatty acids (NEFA) in the blood. These are absorbed by other parts of the body and oxidized to produce energy. The liver also absorbs the NEFA and converts them to energy or ketone bodies. The energy produced is used directly by the liver – and the ketones can then further oxidized by other organs to produce energy.

A dip too deep
When the energy requirements can’t be met, two problems arise. Fat accumulates in the liver and blood concentrations of ketone bodies rise to dangerous levels. Feed intake and production decrease. The ketone bodies harm immune cells and ova increasing the risk for disease and reducing fertility.

Read more about the transition dip in our whitepaper or contact us for advice.

This entry was posted in General.